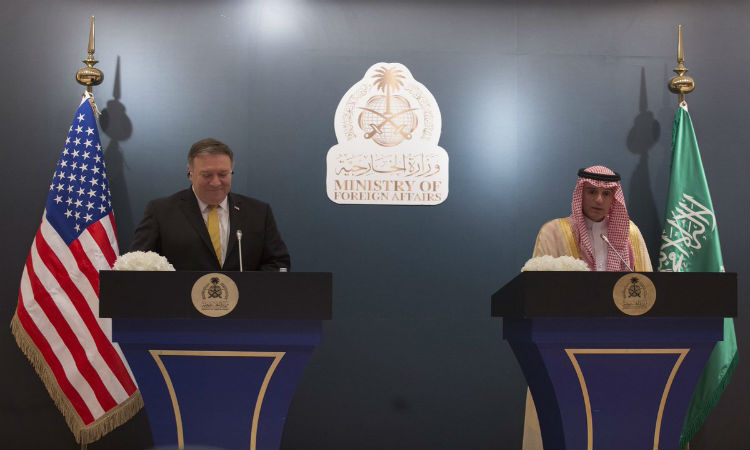 Office of the Spokesperson

SECRETARY POMPEO: Well, good afternoon. Adel, it’s great to see you again, and it’s wonderful to be back here. President Trump came to Saudi Arabia on his first international trip, and now I have done so on my first trip as Secretary of State.

We’ve known each other a while, and the two countries have been great partners across a broad spectrum of activities, as you described. Saudi Arabia is a key partner and a longtime friend, and our partnership is growing. I personally have had the chance to work closely with Saudi leaders over the years on many issues and I look forward to building upon those good works in my new role as Secretary of State.

I would like to thank His Majesty King Salman and His Royal Highness Crown Prince Mohammed bin Salman for hosting me here on this trip. President Trump was recently pleased to welcome the crown prince to the United States. During his visit, the crown prince met with dozens of U.S. government and business leaders, and I built upon those meetings in conversation last night during dinner with the crown prince.

Adel and I covered a lot of ground during our meeting. We discussed Iran, Syria, Yemen, and Gulf relations. The foreign minister knows that Saudi Arabia’s security is a priority for the United States of America. We’ll continue to work closely with our Saudi partners to counter threats to this country’s security.

That, of course, starts with Iran. Iran destabilizes this entire region. It supports proxy militias and terrorist groups. It arms – it is an arms dealer to the Houthi rebels in Yemen, and Iran conducts cyber hacking campaigns. It supports the murderous Assad regime as well. Unlike the prior administration, we will not neglect the vast scope of Iran’s terrorism. It is indeed the greatest sponsor of terrorism in the world, and we are determined to make sure it never possesses a nuclear weapon. The Iran deal in its current form does not provide that assurance. We will continue to work with our European allies to fix that deal, but if a deal cannot be reached, the President has said that he will leave that deal.

I also want to highlight today that the nuclear deal has failed to moderate the regime’s conduct in many other areas. I highlighted a few. In fact, Iran has only behaved worse since the deal was approved. In Yemen, Iran continues to support the violent Houthi rebels by providing military equipment, funding, and training. This is in violation of the UN Security Council resolutions. The Houthis continue to fire missiles into Saudi Arabia on a regular basis, targeting Red Sea shipping and threatening the Saudi people.

While we will continue to assist Saudi Arabia with its defense needs and support its right to defend its own borders, a political solution is the only way to advance long-term stability in Yemen and end the suffering, and I know we agree on that. Adel and I agreed to fully support the new UN envoy’s efforts to advance a political settlement that ends the civil war – an enduring solution to this conflict and the dire humanitarian situation that has followed from it.

The longstanding political and security vacuum created by the conflict, as well as deteriorating humanitarian conditions, have also been exploited in Yemen by al-Qaida in the Arabian Peninsula and by ISIS. When these groups are given safe haven, the U.S. homeland is at risk.

President Trump’s first trip to Saudi Arabia was historic, and I reminded the king how much President Trump appreciated that trip. While he was here, he attended the opening of the Global Center for Combating Extremist Ideology. I asked Minister Jubeir for an update on the work of the center. It represents a clear declaration that Muslim majority countries must take the lead in combating terrorism and radicalization around the world. America is prepared to stand with Saudi Arabia in pursuit of the shared interests and security, but as President Trump has said and said at the Riyadh summit as well, the nations of the Middle East cannot wait for American power to crush terrorism for them. Muslim nations must be willing to take on that burden.

If we’re going to conquer extremism and defeat the forces of terrorism together, I know that Saudi Arabia will be at the front of it. We all must honestly confront the crisis of Islamist extremism and the Islamist terror groups it inspires, and this does indeed mean standing together against the murder of innocent Muslims, the oppression of women, the persecution of Jews, and the slaughter of Christians.

Saudi Arabia’s vision for 2030 and the reform agenda of the crown prince are inspiring initiatives. They promote tolerance, respect, and economic development, and they empower women. We strongly support this important work and the leadership that the crown prince has shown to advance our shared economic interests.

I also stressed to the foreign minister that Gulf unity is necessary. We need to achieve it.

I enjoyed a great deal spending time with the king today. It has been a pleasure to be back in Saudi Arabia among so many of my good friends. I thank you for receiving me, for my hospitality. I know that I will travel here frequently, and I look forward to welcoming you in Washington, D.C. as well.

SECRETARY POMPEO: Thank you for your graciousness.