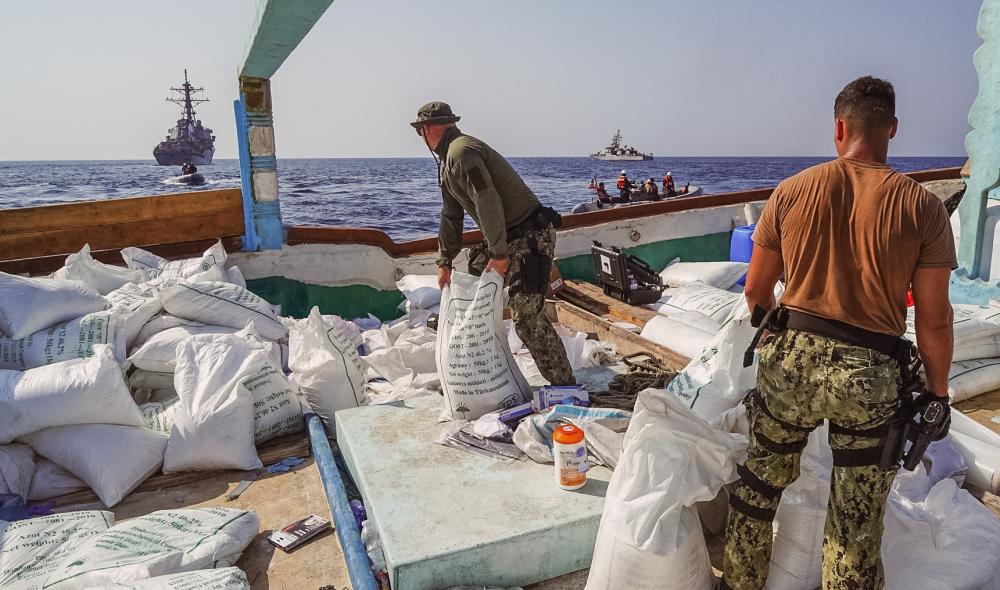 On Nov. 8, U.S. 5th Fleet intercepted a fishing vessel in the Gulf of Oman smuggling lethal aid, including a large quantity of explosive material, from Iran to Yemen.

“This was a massive amount of explosive material, enough to fuel more than a dozen medium-range ballistic missiles depending on the size,” said Vice Adm. Brad Cooper, commander of U.S. Naval Forces Central Command, U.S. 5th Fleet and Combined Maritime Forces. “The unlawful transfer of lethal aid from Iran does not go unnoticed. It is irresponsible, dangerous and leads to violence and instability across the Middle East.”

The search also found more than 100 tons of urea fertilizer. Urea is a chemical compound with agricultural applications that is also known for use as an explosive precursor.

U.S. forces sank the vessel Nov. 13 in the Gulf of Oman after determining it was a hazard to navigation for commercial shipping. The four crewmembers were transferred to Yemen for repatriation Nov. 15 when The Sullivans completed an at-sea exchange in the Gulf of Aden with the Yemen Coast Guard.

“Alongside our partner forces, CENTCOM is committed to security and stability of the region and to deterring the illegal and destabilizing flow of lethal material into the region over land, in the air, and the sea,” said Gen. Michael “Erik” Kurilla, U.S. Central Command (CENTCOM) commander.