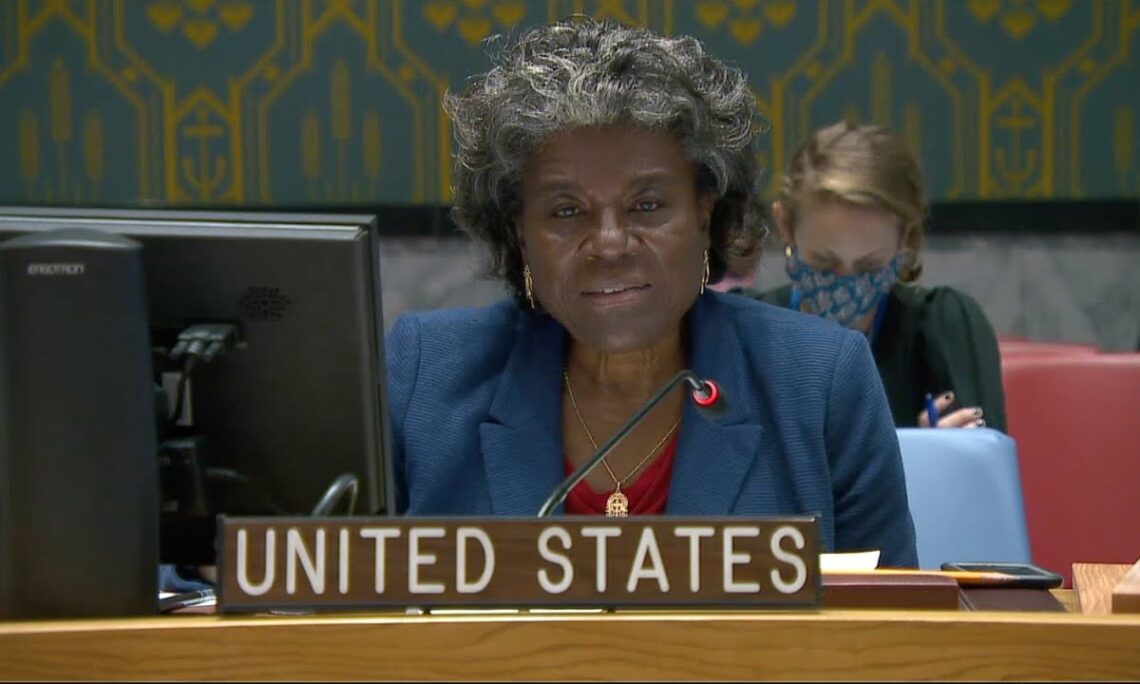 Thank you, Mr. President. The United States greatly appreciates today’s informative briefing. Under-Secretary-General Griffiths, we welcome you back to this monthly meeting on Yemen in your new capacity. And thank you Executive Director Fore for your briefing as well, Assistant Secretary-General Khiari also for your update. We also welcome the participation of the Yemini government in this meeting today.

We warmly welcome the Secretary-General’s appointment of Hans Grundberg as UN Special Envoy for Yemen. The United States is eager to work with Special Envoy Grundberg as he consults widely with a broad cross-section of the Yemeni people. We look forward to his plan for the next stage of the UN peace efforts and to his briefing this Council soon. We were disappointed to hear today that there has been no progress on these talks since the last briefing by ASG Khiari.

The new Special Envoy presents us with a real opportunity. The conflict in Yemen is a rare case where this Council, and the international community, shares a broad consensus. We all agree that the fighting must end. And we all agree that a political path to peace, one with meaningful participation by women, minority leaders, and civil society, must be pursued. Let us seize this moment. Because time is precious, and lives are being lost.

The Houthi offensive on Marib has stalled, but it has not become any less brutal. June was the deadliest month for civilians in nearly two years. This offensive is costly. We have all seen the images of Houthi missile strikes that killed women and children. We need, urgently, a nation-wide ceasefire, so that other areas of Yemen don’t endure unnecessary violence and suffering.

The Saudi-led coalition and Republic of Yemen Government have shown openness to a ceasefire. But the Houthis seem determined to continue their military campaign. This is a moment to change their minds. Between the stalemate in Marib, the appointment of a new UN Envoy, and an unprecedented regional consensus on resolving the conflict, we have a valuable opportunity for dialogue. The parties must seize this opportunity and finally bring this conflict to an end.

Only a durable peace agreement between the Yemeni parties can begin to reverse the dire humanitarian situation facing Yemenis, with more than two million young Yemenis facing life-threatening malnutrition. To address this situation immediately, the United States announced nearly 165 million dollars in additional humanitarian assistance for Yemen earlier this month. This will support the World Food Program in providing emergency food assistance for more than 11 million people every month.

We reiterate the call for other countries, especially those in the region, to increase their support for the UN Humanitarian Response Plan for Yemen, which remains severely underfunded. Thank you to Qatar, in this regard, for its recent contribution of 100 million dollars to support humanitarian operations in Yemen.

We also cannot lose sight of another heartbreaking dimension of this conflict: the abuses the Houthis continue to inflict on children. And I thank Henrietta Fore for raising these concerns. The United States is alarmed by the latest reports of the Houthis’ recruitment of thousands of children into military training and indoctrination camps. This threatens the country’s long-term stability. But more important, it is just plain wrong and gut-wrenching. Children are not warriors. This cannot continue as you heard from UNICEF. We must place children first and we must keep them safe allowing them to pursue their education.

Finally, taking a step back, we have to address the economic issues in Yemen, because they are inextricably linked to the broader peace and humanitarian efforts. We cannot reach a durable solution to the conflict or adequately address food insecurity if the underlying economic grievances that have driven the conflict since its beginning are not addressed. Martin Griffiths laid out the concerns quite effectively, noting that five million people are on the verge of famine.

For the same reasons, the United States urges Saudi Arabia, the Yemeni government, and the Houthis to take steps to ensure fuel is adequately imported and distributed throughout Yemen at a fair price. We again urge all parties to the Riyadh Agreement to redouble efforts aimed at implementation and return the Yemeni government to Aden, so it can restore basic services and take steps to improve economic stability.

We continue to have grave concerns over the state of the Safer tanker, as you have heard from other members today. With their delays and unreasonable demands, the Houthis have thus far squandered the opportunity the UN has afforded them to avoid an environmental and economic calamity.

Despite all these challenges, I would like to end where I started, actually on a note of hope: we do have a real opportunity here for peace in Yemen. So let us stand together, our voices united as one Council, and do everything we can to support some of the world’s most vulnerable people and put an end to this terrible conflict.