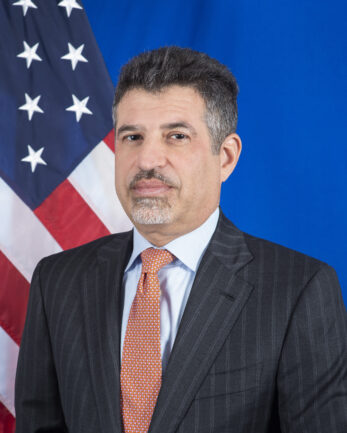 Steven H. Fagin presented his credentials as U.S. Ambassador to the Republic of Yemen on June 1, 2022 in Aden. A career member of the Senior Foreign Service, class of Minister Counselor, Ambassador Fagin was most recently Deputy Chief of Mission at the U.S. Embassy in Baghdad (2020-21). He was previously Principal Officer at the U.S. Consulate General in Erbil, Director of the State Department’s Office of Iranian Affairs (2015-18), and Director of the Regional Affairs Office in the Department’s South and Central Asia Bureau (2013-15).  Since joining the Foreign Service in 1997, he has also served abroad in Brussels, Islamabad, Nur-Sultan, Mostar (Bosnia and Herzegovina), Minsk, Tbilisi, and Cairo, and in Washington as a Pakistan Desk Officer and Special Assistant to then-Under Secretary of State for Political Affairs Nick Burns. Ambassador Fagin is the recipient of various Senior Performance, Superior Honor, and Meritorious Honor Awards, as well as a Presidential Meritorious Rank Award. He holds a B.A. from Williams College and an M.A. from the University of Michigan. Ambassador Fagin additionally attended Harvard Law School and was an exchange student at Tbilisi State University in Georgia. He was born in New York City, grew up in New Jersey, and is a resident of Washington, DC.