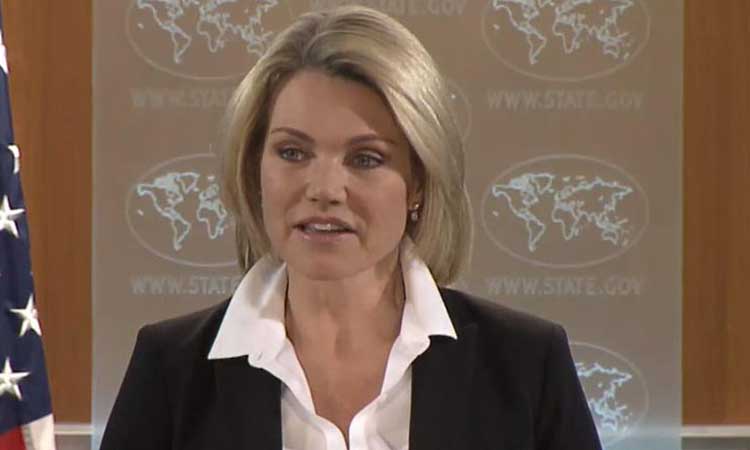 QUESTION:  President Trump yesterday instructed the administration to ask the Saudis to let humanitarian aid immediate access to Yemen.  Did you at State Department talk with the Saudis?  And if yes, what was their answer and what are the results of these conversations?

MS NAUERT:  I can tell you that the U.S. Government has had a series of conversations with the officials in Saudi Arabia.  Let me start by saying – and I want to raise this issue with everyone because we have all followed the death of Ali Abdullah Saleh, the former president of Yemen.

Let me start by saying that we are extremely concerned about the increase in violence in Yemen.  That has not gotten a ton of coverage in the news recently, although I know you are all interested in it.  I want to be clear in stating that we call on all parties there to reject the use of violence against their political opponents.  I will get back to your humanitarian aid question in just a minute, but I wanted to highlight this because the situation is so dire, and the more that we see violence take place, the worse the situation can become for civilians, in particular for women and children.
We are particularly concerned by the reports of Houthi actions in Sana’a, including the unlawful killings, the mass detentions, and the violent suppression of peaceful protests.  An enduring solution to the conflict and the dire humanitarian situation will not be reached militarily.  We have said that again and again.  All sides must agree to immediate cessation of hostilities and return to UN-mediated negotiation toward a comprehensive political agreement.  A political solution is the only way to advance long-term stability in Yemen.

The President issued a statement yesterday.  He had directed administration officials to call on the leadership of the Kingdom of Saudi Arabia to request what they completely – that they completely and immediately allow food, fuel, water, and also medicine to reach the Yemeni people who need it so desperately.  The Secretary has consistently expressed his concern about Yemen’s humanitarian crisis to the Saudis, and the administration will discuss the President’s message directly with Saudi leadership in the near future.

I don’t have any calls or readouts to provide to you on this time, but this is something I can tell you when I’ve sat in the meetings with Secretary Tillerson related to that region, it’s always been an issue that he has brought up, the humanitarian situation, and he’s called upon leaders in the region to use whatever influence they have to help with the humanitarian situation in Yemen.

QUESTION:  But since yesterday’s statement there has been no new conversation on —

MS NAUERT:  Not – I don’t have any additional calls or any meetings or anything to read out for you on that, but the President issued his statement and I think that that was pretty strong.  Okay?  Anything —

QUESTION:  Have the Saudis —

MS NAUERT:  Anything else on Yemen?

QUESTION:  Have the Saudis responded to you on the President’s (inaudible) or do you know —

MS NAUERT:  Not to my knowledge.  If I have anything for you on that, I can certainly check.

QUESTION:  So is it the assessment that the Yemeni civil war has completely gone out of control?

MS NAUERT:  Well, I think we’re really concerned about the level of violence.  I mean, we have talked since day one on my job here about the humanitarian crisis in Yemen, and that the humanitarian crisis there is one that is manmade.  You have men, women, and children starving – a tremendous food insecurity there.  You have a cholera problem.  You have the fighting, and now, since the killing of the former president, you’ve seen additional civil unrest.  It’s a dire situation.  We’re tremendously concerned about that violence.  But if we can get more humanitarian aid – more humanitarian aid in there, that that would be certainly a step in the right direction, and we’re trying to push for that.