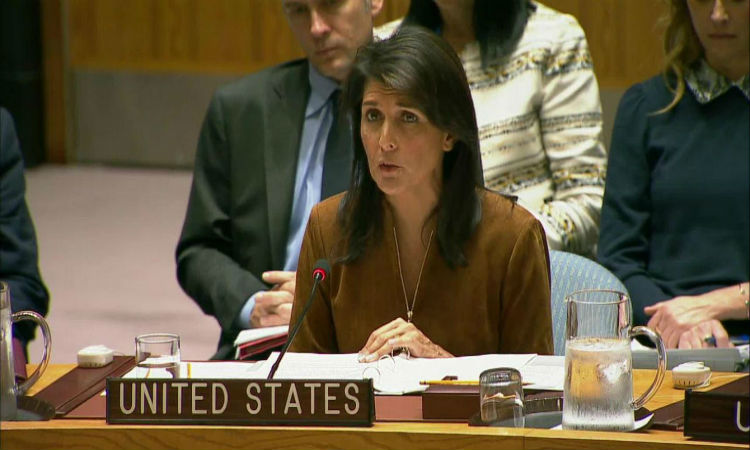 “Our goal in discussing the Middle East is to work on peace, security, and human rights for the region. We can’t talk about stability in the Middle East without talking about Iran. That’s because nearly every threat to peace and security in the Middle East is connected to Iran’s outlaw behavior. For the international community’s engagement with Iran, this is a time of clarity and opportunity. The United States has now embarked on a course that attempts to address all aspects of Iran’s destructive conduct, not just one aspect. It’s critical that the international community do the same.”

“As a Council, we’ve adopted a dangerously short-sighted approach. Judging Iran by the narrow confines of the nuclear deal misses the true nature of the threat. Iran must be judged in totality of its aggressive, destabilizing, and unlawful behavior. To do otherwise would be foolish.”

“With our decision to take a comprehensive approach to confronting the Iranian regime, the United States will not turn a blind eye to these violations. We have made it clear that the regime cannot have it both ways. It cannot consistently violate international law and still be considered a fit and trusted member of the international community. This Council now has the opportunity to change its policy toward the Iranian regime. I sincerely hope it will take this chance to defend not only the resolutions, but also peace, security, and human rights in Iran.”